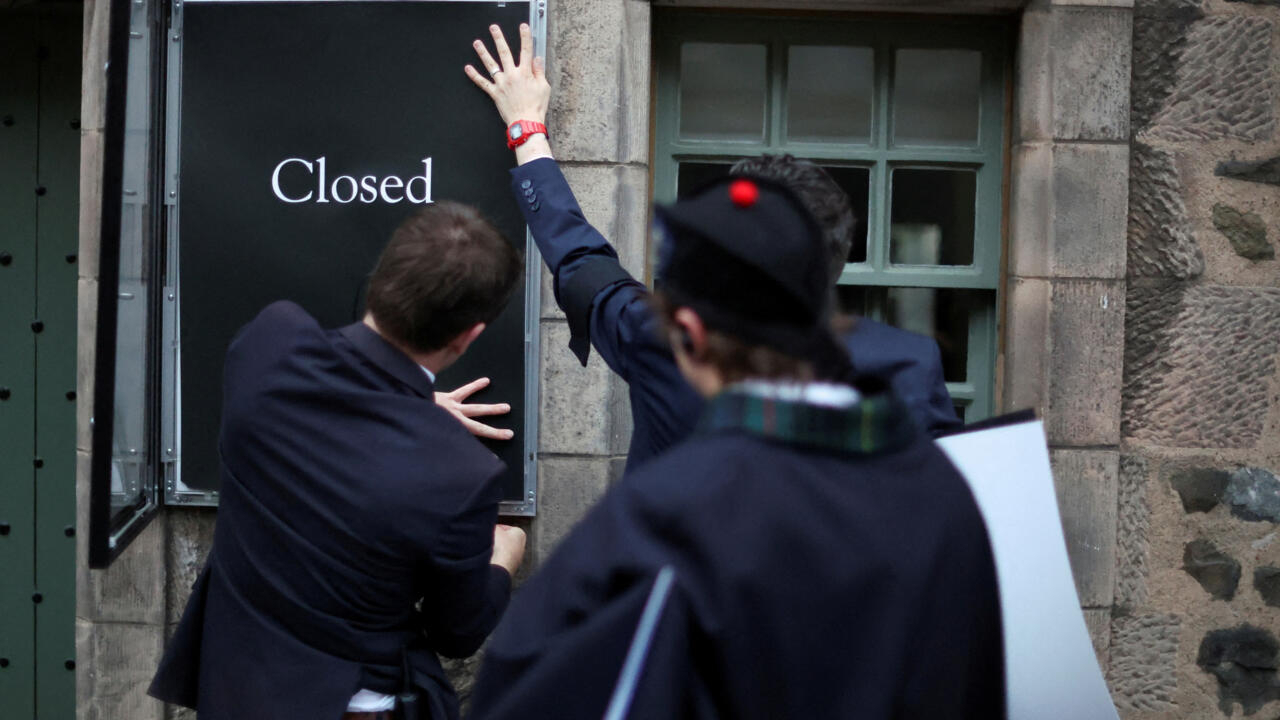 The closure of shops, restaurants, offices and more is expected to bring the UK to a standstill on Monday as Queen Elizabeth II’s funeral is held at Westminster Abbey in London.

The d*ath of Queen Elizabeth II was met in the UK with grief and pageantry on a large scale. From the moment the country’s longest-serving monarch passed away, her journey from Aberdeenshire to London has been marked by a royal spectacle, public heartache and nearly total coverage in the British media.

The logistics of the 10-day mourning period to mark the passing of a monarch, who was constantly held in high esteem by the majority of British audiences and on the international stage, was no small feat either.

Hundreds of police other local forces across Britain are joining London’s Met Police to ensure the hundreds of thousands of expected mourners form an orderly queue along the banks of the River Thames en route to pay homage to the Queen.

An unprecedented security operation is expected to accompany some 500 foreign dignitaries, including presidents, heads of state and monarchs, who plan to attend the Queen’s funeral in London on Monday.

“There are plenty of police, and I’ve never seen so many soldiers,” said Pat, 70, who traveled to London on Wednesday to visit Buckingham Palace. Large crowds and security measures meant Pat could only get within a mile of the royal residence.

Yet at the heart of a logistics operation that has been in the making for decades is an epicenter of calm. The skies over London were cleared of planes on Wednesday to ensure respectful silence as a procession carried the Queen’s coffin from Buckingham Palace to Westminster Hall where she now rests in state.

Several live streams showed footage of members of the public quietly parading past his coffin. Mourners were invited to refrain from making noise once inside the room. “They are suddenly really overcome by silence and tranquility,” said Bénédicte Paviot of FRANCE 24, reporting from London.

The silence will come to a head when the Queen’s funeral takes place on Monday morning, when daily life in much of the UK is expected to come to a halt and two minutes of silence will be observed across Britain.

“A day that people will never forget”

The date of the funeral has been declared an exceptional national holiday, meaning schools and many workplaces will be closed.

Although the UK government has said there is no obligation for individual organizations to cancel events or close venues, many are choosing to close out of respect.

Major supermarket chains – which normally operate for reduced hours on public holidays – will close along with other national retailers, restaurants, coffee chains and gyms. Amazon deliveries will be halted in the morning, McDonalds will close until 5 p.m. and popular pub chain Wetherspoons will not open until after the funeral service is over.

Entertainment venues, museums, galleries and tourist sites will also close, except for around 150 cinemas which will open specifically to screen the funeral for free.

The national postal service will be suspended for the day along with most audiences and all London Fashion Week shows. Premier League football matches scheduled for Sunday evening have also been rescheduled.

Flights to and from London will again be halted to ensure a peaceful procession after the funeral from Westminster Abbey to Windsor Castle, where the Queen will be buried.

The scale of closures and cancellations will likely underline the feeling across Britain that an extraordinary event is unfolding.

‘Many people felt affected by the Queen’s d*ath in one way or another, but they will be directly affected by Monday’s event,’ said Britain historian Dr Luke Blaxill modern at the University of Oxford. “Even on public holidays or major public occasions, we are used to a modicum of normal life. But it will clearly be a day that people will never forget.

One step too far?

Some organizations have been accused of taking their respect for the late monarch too far.

Resort operator Center Parcs received an angry response to the announcement that holidaymakers had to leave their accommodation on the day of the funeral as normal activities such as archery and water parks would be closed . The British Cycling Association has also been ridiculed for its – now amended – “strong recommendation” that people in the UK refrain from using bicycles during the funeral ceremony.

Even more controversially, surgeries can choose whether or not to open for the day and the National Health Service (NHS) said the bank holiday would disrupt thousands of scheduled appointments and operations, although healthcare emergency will continue.

The NHS said the decision to postpone treatments was made to allow staff to take time to attend the funeral despite the high stakes.

“For patients who may have waited up to two years for elective surgery or appointments, if they are then canceled on the 19th, it will be incredibly distressing,” Ellen Welch, co-chair of the group, told Reuters. British pressure Doctors’ Association. .

The scale of the closures has also sparked rumors. Suggestions on social media that families should cancel funerals scheduled for the same day as the Queen’s have proven unfounded.

As Britain endures a cost of living crisis, food banks have also come under fire for planning to close.

‘Unite to say one last goodbye’

For most British residents, the funeral of Elizabeth II will be the only national event in living memory that has brought daily life to a halt so completely – apart from Covid lockdowns. Only the elderly have childhood memories of similar scenes when the Queen’s father, King George VI, died in 1952.

Yet most think it’s fair close schools, shops and museums to mark the Queen’s funeral.

For Pat in London, the prospect of closures is part of a particular atmosphere that has reigned since the announcement of the d*ath of Elizabeth II. “All of this contributes to an atmosphere of calm, stillness and tranquility,” she said. “Even the weather has been mild, most of the time.”

The closures will also serve to draw attention to events in London and create a shared experience for those living across the UK, whether monarchists or not. “It’s an encouragement for people to unite behind a final farewell to Queen Elizabeth,” Blaxill said.

It’s also a time to witness a new king, which polls suggest many Britons are keen to do. Following the d*ath of his mother, 63% of Britons said they thought Charles would make a good king, up from 32% in May 2022.

As King Charles III ascends the throne, many Britons are left disillusioned with their political leadership. Planned strikes by railway, postal, garbage and dockworkers across the UK have also been called off following the Queen’s d*ath.

There’s a temptation to see a new monarch as a sea change, Blaxill said, “even if he has very limited royal power.”

“The expectations resting on the shoulders of the new king are quite considerable. And the longer we suspend national life to say goodbye to Elizabeth and hello to the new king, the more this unrealistic expectation kicks in. [up].”